What is so nice of South Facing house? Is it just because ancient Chinese Emperor like South?

I guess this trend has also not escaped the eyes of a country leadership. I have here not one but two top leader of a country orientating their offices to face South. One of them is Malaysia where the office of the Prime minister, Perdana Putra while the other is South Korea’s President official building which is also facing South.

Since 2001, the then Prime Minister, Tun Dr Mahatir moved in and shortly after he announced his retirement. Tun Abdullah Badawi took over and the ruling coalition lost badly the once usually held 2/3 majority in the parliment. The Malaysian economy is already sluggish. Then the current Prime minister D.S. Najib Razak took over after Tun Abdullah stepped down after a poor election performance, he was accused of mishandling 1MDB, the mystery of Altantuya and also the declining economic performance of Malaysia. As of today the Malaysian Ringgit is at its lowest compared to USD at 4.50 exchange rate & it’s political struggle is causing anxiety among foreign and local investors alike.

If you look at the surroundings land formations and coupled by the reason it is facing South of Sitting Gui Facing Ding, these could be read from the feng shui of the PM Office.

Here is the Google map view from above, this building is sitting on top of a small hill, a typical landform or San He school formation.

END_OF_DOCUMENT_TOKEN_TO_BE_REPLACED

Yesterday my client bought me a dinner because he was happy to share his results with me.

This is a case of client with a Period 8 house and South Facing and was having 88 main door. 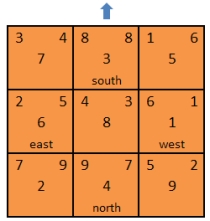 He first engaged a master from Singapore, then followed by a famous female Master who held yearly conference with her partner and finally another master from Southern Malaysia. The red master said to him that this house is not favourable to him since his Bazi requires him to stay in an East Facing house as his Bazi favourable element is wood.

All of them did not yield any results during the past 3 plus years and when 2012 arrived, one by one family members was warded into hospital.

Why they did not see it coming or at least to set the formation right so as to avoid such a big disaster?