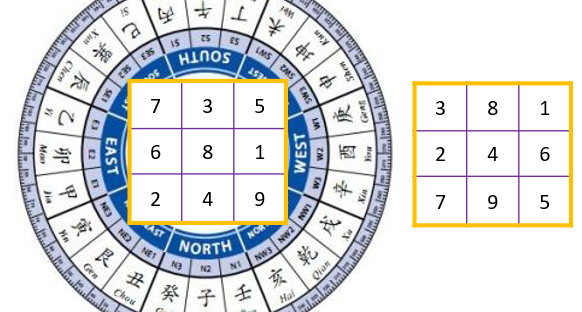 Purple White Script or Zi Bai Jue 紫白诀 is part of San Yuan system of Feng Shui method that is divided into 2 scrolls. Upper scroll is more of theory while Lower Scroll is more of prediction. PWS contributes to Xuan Kong Flying Star system in term of prediction along with three other famous classics of Xuan Kong system.

Today I will leave the section about flying star prediction but rather focus on the world epidemic, the Corona Virus codename Covid-19 that is sweeping the world by storm today. This virus started or rather discovered first in Wuhan in early December 2019. It then spread pretty fast all over China.

Wuhan was given a total lock down January 23 in effort to contain the spread. It was a bold move by the Chinese government but was widely criticized back then. the Wuhan lock down was just 2 days before Chinese new year. Then we entered the new solar year of Metal Rat 庚子 on Li Chun 立春 4th February 2020. Since then after it becomes a world epidemic as South Korea the next country infected, Japan, Iran, with Italy taking the lead for the Europeans.

Thus it was primarily a China problem before Li Chun and it accelerated to be a global pandemic after Li Chun. By 7 April 2020 the world count is show below.

Being a Feng Shui Consultant, many started to ask me why this thing happened and why no master predicted this epidemic last year. As I am a non believer in broad based predictions as I have always view them with more entertainment value rather than of any Real Feng Shui significance, thus I do not do annual predictions. The predictions results are usually coincidental rather than being consistent.

But this question triggered my mind over a subject which I have not looked at for a while, the Purple White Script. PWS has a theory on time matters in the Upper Scroll but usually I’m more focused on the Lower Scroll as I am more of a practitioner than a theorist.

Feng Shui is, in this case, for time based predictions. Prediction does not mean it will happen for sure, just that the chances are higher and how these changes affect the overall situation on a macro basis.

Purple White Script Feng Shui system has this concept of luck or Yun that is divided into few levels. But since we are looking at world predictions, we will have to look at the first 2 levels. From the changes of the Yun, we can see how changes will affect the world one way or the other.

As we entered Metal Rat 庚子 Year in 2020, this coincide with the change of Yun in PWS as well. The last change was in 2008 of the Earth Rat 戊子 where there was a global financial melt down triggered by the failure of Lehman Brothers in September of 2008.

The relations of the Major Yun is Si 死 or dead while for the Minor Yun is Tui 退 or retreat. This type of combo brings both disasters or sickness and then loss of wealth. The interaction of the world luck it seems is going into this trend for now and a bulk of Metal Rat 庚子 year where first a global pandemic and an aftermath economic crippling due to the prolonged lock down. Furthermore, due to the lock downs, governments are dishing out fiscal deficit stimulus packages in hope to sustain the economic performance.

The oil price also had seen a major drop to the level of USD20-30 range per barrel. Thus it is very likely that after the pandemic, the world will see a global recession in line with World Bank and IMF forecasts.

Light At The End of The Tunnel

So when it will turn tides? There are a number of factors to weigh such as the individual country’s financial ability, the Feng Shui of the country etc.

The surest is when we enter the Metal Ox 辛丑 year in February 2021, where there can be an economic turn around. Nonetheless, Health or Human related issues, even by early of Ox year will still see residual effects lingering. This is how PWS look at it.

Hope you liked this sharing on Purple White Script.