After my last blog about City land forms on Kuching Town in Sarawak and how land form Feng Shui has influenced the growth of that town. After that blog posting back in 2015, it drew praises as well as criticism from some Feng Shui critiques who do not understand the San Yuan Liu Fa system.

Xuan Kong Liu Fa, also known as the Six Method, is an extensive system that deals with major land formations right down to small properties within the San Yuan School. It is a system that is not well known and relatively little source from the internet. This system has 2 major origins, one from our lineage and the other is from Taiwan. There is some variation in the system from the 2 sources as well.

I was challenged again to investigate this little town up north of Malaysia in the State of Perak known as Taiping because some friends asked me about it.It was once a flourishing town with all the firsts in Malaysia, a booming economy and produced many talents but now it has been labelled as “old folks town”

Taiping is one of the few towns in Malaysia that still carries a Chinese meaning 太平 behind that means eternal peace.

Taiping as a long history and you can read about it in Wikipedia as well as a few other sites listed below. I have made a simple time line on the history of this town.

In short, Taiping glory started way back in the around 1850 but ended around 1940. Then the Second World War broke out and since then the Tin industry was still prospering and it tailed towards the 60’s. 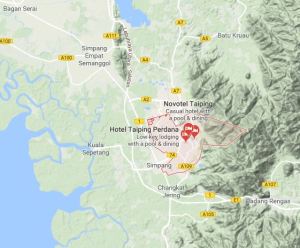 From the time line, you can see the town actual high growth was between 1880-1920 and that is in the Period of One till Four. Period One started from 1864 while Period 4 ended in 1953. Soon after the expiry of Period 4, the world market for Tin follow suit and ended in around the late 60s.

Period refers here to a time frame. Each time frame or Period termed as Yun 运 in the study of San Yuan system of Feng Shui. Each Yun is varies between 18 to 27 years in the Liu Fa system.

The violation of the Golden Dragon theory after Period 4, has caused the downfall of this once promising town.

Till today Taiping and Kamunting has changed as has Malaysia in the past decade. Unfortunately, not all for the better. The un-monitored expansion to the town will undoubtedly effect its position as a heritage town. There is so much to conserve in this old town and not much attention has been given to it. Defacing old shop house facade with gaudy, neon signboards, cheap renovation materials, tearing down old to be replaced by garish non-discrete buildings – that’s what is done best in Malaysia . What’s also worrying is that when facade are intact, the beauty of the interior are gutted to be replaced by grotesque cheap paneling and shoddy interior refurbishment.

My friend’s feedback is that Taiping until today is still a slow town without much major economic activities. Most youngsters are living out of the town due to low job prospects. Yet its rich past still leaves mark of a once prosperous town and talents.

“There has not been much growth in Taiping ever since a period of flourishing in the 1960s and 1970s after we gained Independence.

“This has resulted in a migration of young adults to bigger cities in search of work as there is practically no work opportunities for young professionals here,” he said.

Instead, Yeap pointed out that development was more prevalent in Kamunting.

“Kamunting used to be a major industrial area with many factories producing electronic and electrical goods, and textile, though many of these factories have since closed down or relocated to other countries.” Unqoute

Perhaps to a Feng Shui skeptics, this is just another story but those who knows the real knowledge of San Yuan Land form Feng Shui, will certainly be convinced that Feng Shui had it’s hand dealt on this town after all, Feng Shui is the study of Land Formations or the Earth’s Energy Map.

A town once prosperous and majestic

Now could only reminisce the past

The breath of the Golden Dragon has expired

One can now only wait for flip of Yin to Yang