In the study of Feng Shui there are 2 Bagua (八卦) we cannot miss. First is the Early Heaven Bagua and there other is known as the Later Heaven Bagua.

Why is it called early and later? Early Heaven Bagua (EHB) was invented by Fuxi close to 5000 years ago while Later Heaven (LHB) was developed much later. LHB was thought by many to be a rearrangement of the EHB by King Wen but this is not really the case.

Then as time goes by, the art of Feng Shui is slowly leaked out of the Imperial palace into the hands of the commoners and thus today it is further popularized world wide beyond the shores of China to as far as United States, UK, Russia & down south to Australia. Though out the thousand of years this once highly guarded secret in the Imperial palace after being leaked out, many people began to hear stories about how it can change one’s fate and enhance our life and fortune.

Opportunist, armed with some basic knowledge and information, soon developed many new theories with each their own idiosyncrasies.

Some who pretend to be Taoist priest who possess the knowledge of feng shui tries to make a living by selling Feng Shui items & one of the best sellers is nonetheless, the Feng Shui Bagua. These type are collectively known as Jiang Hu (江湖) priest in Chinese culture.

There are many usage of it, including as what I was told by a “Feng Shui Master” before it can stop all qi into the house. Astonishingly I believed it back then! Anyway it is always comforting to hear of a “solution” when one is going through rough times. This is understandable but still we need to be clear about it’s usage and meaning.

Now I have discovered that it is not true. It can stop spirits but not Feng Shui Qi 气 as claimed by the master. 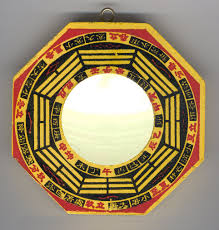 When I do more research into it, I noticed only one type of Bagua is used to prevent spirits from entering the house and why this and not the other? This has got to do with the Taoist believe of Yin-Yang balance.

As times goes by new variations of Bagua are used, some with concave mirrors while some with convex mirrors added in. Well if you are dealing with spirits it will help but if you are dealing with Feng Shui Qi, it does not work. The notion of mirror added was because mirrors can deflect Qi. As I deal and study deeper into classic Feng Shui, Qi, once you understand what it is, cannot be deflected by mirror. This is another clue of a under par Feng Shui Master.

Next time if someone is asking you to buy a Feng Shui Bagua, please be sure why you want to buy it. Buy it if you have a spirit wandering in your house and beware if the person claims himself to be a Feng Shui Master or Consultant.

This site uses Akismet to reduce spam. Learn how your comment data is processed.