As I read the news article on a local daily on ex President of Taiwan Mr Chen Shui Bian released on medical parole after serving 6 out of the 20 years sentence for graft.  He is 64 this year and for the Chinese solar calendar it is still the year of the Jia Wu. http://www.thestar.com.my/News/Regional/2015/01/06/Taiwans-expresident-Chen-freed-Disgraced-leader-released-from-prison-on-medical-parole/ 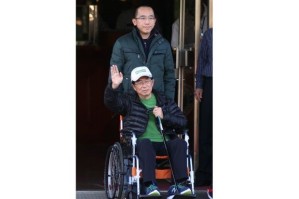 So I went on to goggle about him over the internet and I found out actually he has two birth dates. Mr. Chen was born to an impoverished tenant farming family in Guantian Township of Tainan County (now part of Tainan City) on the second day of the ninth lunar month in 1950 (12 Oct) but was not formally issued a birth certificate until February 18, 1951 because of doubts that he would survive.

There has always been a debate if one’s destiny should follow the actual date of birth or the official date of birth. Even in feng shui  has similar questions such as should we us Winter Solstice (Li Dong) to cut off the new year or Li Chun?

The second reason that caught my attention is how would a Bazi for a person who has gone from the highest point to the lowest point in a matter of 10 years. What is the cause of it? Can it be seen from Bazi?

Thus I will attempt to present my views and readers, you make their own conclusion.

A brief commentary based on structures, it has a structure of Indirect Wealth meeting Indirect Resource will turn disaster to honour and glory. This type of structure can yield I have also list down the life events according to the luck cycle of Chart A:

Now if I have used 18/2/1951, the date he registered his birth certificate, this would have been his Bazi. Let’s call this chart Chart B. A brief comment on the structure of this chart is that it has a very powerful structure of Eating God meeting 7 Killing which can bring the Day master authorative nobility.

I have also list down the life events according to the luck cycle of Chart B:

Without the hour of birth, it is difficult to see the entire picture of a bazi but nonetheless for sake of study, we will attempt the 2 charts using only 3 pillars and I shall pick 3 major events that falls within the 3 pillars, namely his Early Life, his Presidency, his final Sentence.

If we look at his early life, he was described as a smart person. Chart A would give him this benefit because of the structure of Indirect Wealth seeing Resource.

Coming from a Poor family does not indicate Chart B. Chart A makes sense that he would likely be a weak Day Master and hence will experience poor beginning life.

If you study Chart A, he became president during the luck of Xin Mao in the year of Geng Chen.

Here, during the Yin-Mao-Chen formation of Wood happens and also sees the arrival of friends stars. Being a weak day master this is a favourable formation. Friends can be translated to as supporters or voters. Furthermore, the combination of Rabbit and Dog brings favourable outcome to this chart.

If you look into Chart B, he became president during the luck of Yi You. 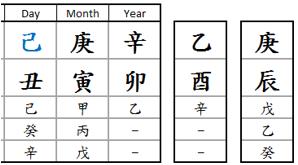 There is also a formation of Yin-Mao-Chen formation of Wood happening but same time and on top of Yi Geng combination happens and with this, he should not be able to be a president.

Going back to Chart A, he just entered the luck of Ren Chen in 2009, he was found guilty of money laundering and was sentenced to prison in the same year of Ji Chou, just after he lost his president immunity.

The Chen clashes the Xu again and the result is his Power useful god being clashed away. Ren is always useless to Geng day master and Ren is the Eating god to Mr Chen SB. This formation in 2009, sees Indirect resource. Indirect resource when is unfavourable to a day master, brings obstacles and damage to reputation. Ren Chen pillar can be read collectively as spouse bringing problems (not all cases but to this formation). Ren coincidently is also the Son in Law.

I know many will ask why Resource is bad for a weak day master?  Well this is the correct way it is in Bazi. Favourable or not the Resource element is Day master dependent and not by balancing of elements.

If you read his news, indeed part of his down fall is due to the spouse & son in law who actually started the problems.

When we look at Chart B, during the Jia Shen luck he was sentenced, here the Jia which clashed with Geng was neutralized by the coming of Ji. Hence the useful god Jia survived.

The Shen-Yin clashed however removed the Yin useful god in the branch. will this cause an imprisonment? seems unlikely since accordingly the stems says his authority while weakened will survive.

This year though in January 2015, in the Chinese solar calendar it still belongs to the Jia Wu year, Mr Chen is “freed” on medical parole and this is likely due to a Geng Day master receiving double useful god of Jia and Ding.

It seems that the actual date of birth has been more accurately describing him based on various angles of reading. just from structural reading itself, Chart A seems to more accurately describe his drastic ups and downs in life. Just today as I was teaching, as student asked me, is there a solution for this and that in Bazi. Well sometimes there is no immediate solution to every problems in our Bazi and in situation like this understand that this part of our journey this life and learn to accept this fact can lessen the pain a lot. Perhaps by perseverance and time, there is a solution to be found.

While my verdict is clear, readers you can make your own conclusion based on your own school’s study.

There is another famous politician who has 2 date of birth. If there is some Likes, then I will blog about him.