What is so nice of South Facing house? Is it just because ancient Chinese Emperor like South?

I guess this trend has also not escaped the eyes of a country leadership. I have here not one but two top leader of a country orientating their offices to face South. One of them is Malaysia where the office of the Prime minister, Perdana Putra while the other is South Korea’s President official building which is also facing South.

Since 2001, the then Prime Minister, Tun Dr Mahatir moved in and shortly after he announced his retirement. Tun Abdullah Badawi took over and the ruling coalition lost badly the once usually held 2/3 majority in the parliment. The Malaysian economy is already sluggish. Then the current Prime minister D.S. Najib Razak took over after Tun Abdullah stepped down after a poor election performance, he was accused of mishandling 1MDB, the mystery of Altantuya and also the declining economic performance of Malaysia. As of today the Malaysian Ringgit is at its lowest compared to USD at 4.50 exchange rate & it’s political struggle is causing anxiety among foreign and local investors alike.

If you look at the surroundings land formations and coupled by the reason it is facing South of Sitting Gui Facing Ding, these could be read from the feng shui of the PM Office.

Here is the Google map view from above, this building is sitting on top of a small hill, a typical landform or San He school formation.

This building was completed in 1991 On the old ground of the Jesong empire and was said to be of good feng shui back then. It had good supporting mountain behind with good Green Dragon embrace according to San He feng shui system.

This is also a South facing property with a big “Octopus head” like hill behind. There is a green dragon embrace stretching from the right curving into the front of the property. On the left side of the photo you will see a lower hill embracing the same way. This is the White Tiger hill. Thus to most landform based feng shui practitioner this is a good formation with the green dragon and white tiger crossing Ming tang. Ming tang is the wide space in front of the building. 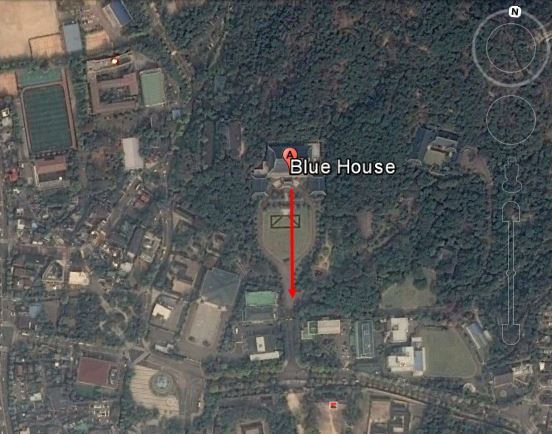 Far from this Ming tang there is a river crossing if you look at the google map site. 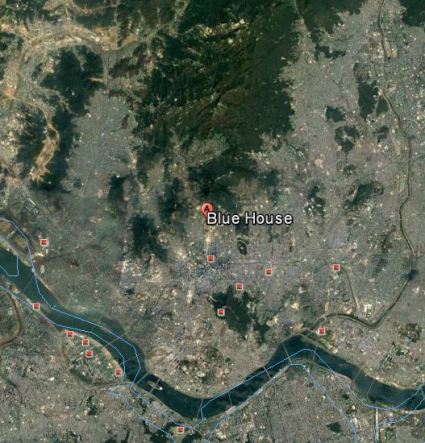 However, ever since the past presidents, starting from Roh Tae Woo to Park Geun Hye that have occupied the office in this building, the records weren’t very impressive. Park was impeached, bribery changes, collapse of Kia group etc.

Here is the list of presidents and you shall notice most of them did not last many terms and were with scandals or committed suicide. Roh Tae Woo, Kim Dae Jung, Roh Moo Hyun, Lee Myung Bak, Park Geun Hye to name a few.

Thus South Facing buildings are not always good. It is only good in the hands of a capable master. The reason is feng shui is an in depth study and there are many factors and formulas involved to have a good feng shui formation that fits it’s intended purpose. At the end it is also how authentic is the knowledge and experience of the feng shui master.

By generalizing one particular direction is only a novice say. As we say in English “half past six” knowledge is dangerous and readers please be careful with what you listen.

Moral of the Story

It is not just because Chinese Emperors like South facing orientated building, it is a yardstick across the board. Knowing what formation is good for which purpose is the work of a professional feng shui consultant. There is good feng shui in every direction if one knows how to find it and if you can get to own it, of course :).